“Musth” is a periodic condition in bull elephants. Characteristic of this biological condition is aggressive behavior which is accompanied by the sudden rise of reproductive hormones. The testosterone levels in this stage of an elephant are sixty times greater than other periods of its life cycle.

The behavior of a musth elephant is dangerous regardless of whether it is wild or domesticated. According to a few records which were found regarding this life stage of elephants, musth elephants in zoos that were usually very friendly have killed a number of keepers due to their uncontrollable nature. Musth is noticed in adult Asian elephants between the ages of 15-60 years and usually observed once a year or very rarely twice a year. The main manifestations are the spreading of ears, alertness, fully opened ogling eyes with roving eye balls, stiff and tense body, extended blowing of its trunk and a charging/destructive tendency towards human beings. The manifestations of musth vary from 15 to 90 days which may be classified as premusth, musth and post-musth. 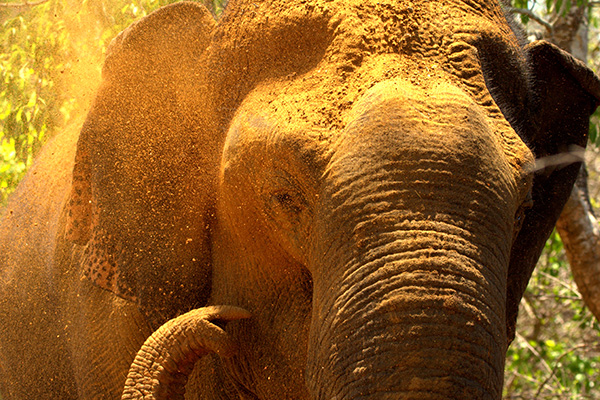 This well-grown bull, around 30-35 years old, is in his post-musth period. Though much aggressive behavior is not seen, the pain can be severe. During the post-musth period, their water requirement is much higher. The more willingness to spend time in the water can manifest another characteristic. During this period they are especially found in tanks and rivers. This male elephant spends more than one-and-a-half hours in the “Rakinawala” area in the Yala National Park as observed by my English clients and me in May. Our initial hesitation to get closer to this bull faded as we realised he is passing the post-musth period of the cycle.

When it comes to the end of the bathing time, he got off to the road and had a sand bath. A sand layer around the body provides protection to the bull from blood-sucking insects and the elephant is seen after every bath with dusty, sandy skin.

At this stage, the dribbling of urine would end and it is possible to handle most of the animals irrespective of whether or not the temporal glands are secreting. The secretions become more pungent and contain a compound, 2- nonanone. There will be a varying period of recovery from the state of excitement to that of normalcy.