When travelling from Kataragama to Buttala you pass block 3,4 & 5 of Yala since the road passes through the National Park. While travelling along this road one can easily get the chance to spot Elephants and spotted deer. Travelling through this road also gives you the chance to spot Sloth Bear and Leopards from time to time. Block 5 entrance (Galge) of Yala is also situated on this road. 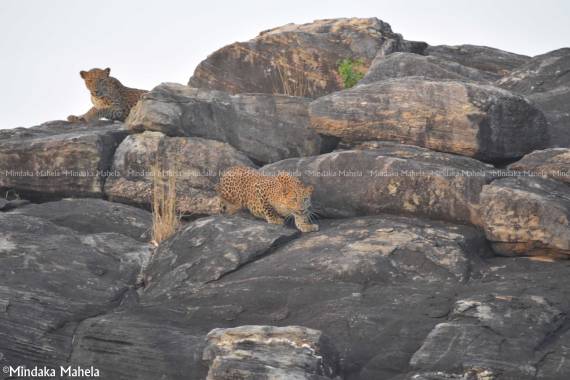 As seen in the picture which was captured by Mindaka Mahela you see two leopard cubs resting on a rock near the Galge entrance.

They spent more than one hour until sundown in the evening. The mother and the two cubs cross this road in the morning and evening. Most people are ignorant of the wildlife whilst travelling through this road and travel at high speeds due to the lack of any traffic or such. Attention should be paid whilst travelling through this road since at night Elephants cross this road as well and one could prevent a possible accident with the wildlife of the area. So as always one must drive smart and carefully even on a lonely road such as this and prevent an accident from taking place.