Which is the best National Park to see Sloth Bears, Leopards and Elephants

Sri Lanka is one of the best places in Asia for seeing wildlife. It is also one of the best all-round wildlife destinations in the world for a mix of big game, marine life and varied landscapes.

Sri Lanka is proud of its natural beauty. For over 2,000 years, swathes of land have been preserved as sanctuaries by Sri Lankan royalty. Mihintale, the world’s first reserve, was created here in the third century BC. Now 98 areas, including strict natural reserves, elephant corridor, national parks, nature reserves and sanctuaries are protected lands in the island.

Wilpattu National Park is situated in the dry zone, and is unlike any other wildlife sanctuary in Sri Lanka. A unique complex of over 50 wetlands called “Villu” is the most prominent topographical feature of the national park. ‘Villu’ are shallow natural lakes filled with rainwater surrounded by open grassy plains amidst the dense scrub jungle.

Sloth Bear is generally a nocturnal mammal, but Wilpattu National Park is full of bear’s favorite food sources for daytime sightings, especially the bear takes a main role in the park from mid of May until end July because Palu (Manilkara hexandra) and Weera (Drypetes sepiaria) trees begins to bear fruits. That’s is called the Palu season and that’s the best time to see Sri Lankan sloth bears. After all, there are plenty of termite mounds everywhere in the park to provide termites, which is the main food of bear throughout the year for daytime sightings.

According to a study that began in 2013 aimed at identifying the population density of sloth bears inside the Wilpattu National Park by Mr. Ranil Nanayakkara, founder and team lead at biodiversity education and research, 59 sloth bears were found during the research and
Wilpattu have shown that is the sloth bears stronghold.

The Park is split to five sectors and two of which are open to visitors and it is the most visited and second largest National Park in Sri Lanka. the rocky outcrops scattered over the park provides vantage pints to enjoy the dry zone landscape, low scrub and woods and coastal belt.

Sri Lanka is an island with an abundance of flora and fauna. But attention has been driven to the bigger mammals in the food chain while other species that create a balance in this food chain. Other than Sri Lankan Sloth Bear (Melursus ursinus inornatus), Sri Lankan Elephant (Elephas maximus maximus), and many other animals, Yala National Park is the stronghold to Sri Lankan Leopard (Panthera pardus kotiya).

The most renowned resident of Yala National Park, the Sri Lankan Leopard (Panthera pardus kotiya) can be seen throughout the park. Leopards are nocturnal and territorial, even so for the most reliable sightings, it is best to visit during the dry season – January to August with the water levels lower. As the apex predator, Sri Lankan Leopard have evolved to be bigger and less nocturnal than those in Africa. And Yala National Park so famous is it is high concentration of leopards, the highest in the world. That is why Yala is the best place to see them. If you want to see a leopard, there is no better place.

According to the research done by Mr. Andrew Kittle – Zoologist, principal researcher/founding trustee of The Leopard Project Wilderness and Wildlife Conservation Trust Sri Lanka, the total individual leopard in block 01 is about 40-50

Udawalawe National Park was established in the year 1972, with the objective of protecting the catchment area of Udawalawe reservoir, which provides water for agriculture and hydro-power generation spreads over an area 30,821 hectares and lies on the boundary of Sri Lanka’s wet and dry zones.

Udawalawe is undoubtedly the best place in Sri Lanka to see wild Sri Lankan Elephant throughout the year. There are about 250 believed to be permanently residents elephants in the park and over 400 that use the protected area, (data by The Udawalawa Elephant Research Project) they often roam in herds of up to 100.

The best hours to visit the park are in the mornings and evenings. 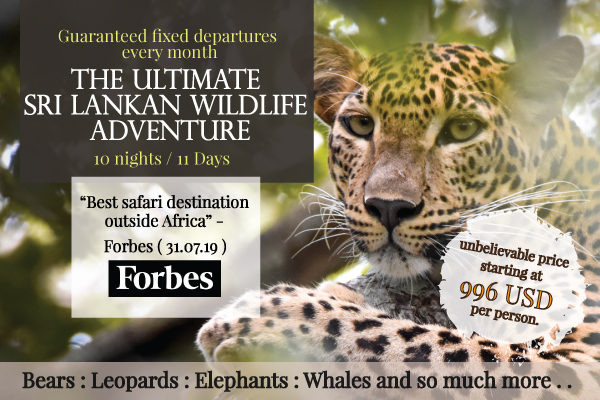 2 thoughts on “Which is the best National Park to see Sloth Bears, Leopards and Elephants”